Skip to main content
Official Hell (US) Cloud and M.S.W. Products and Information


Hello everyone,
I’m excited to announce that Hell will be embarking on a U.S. tour this spring, performing the Hell self titled album in it’s entirety. The project has taken an extended hiatus while I worked on/with other projects but now my focus is going to be on Hell and finishing up some new material I’ve been working on.

My good friend, Andrew Black, will be replacing Hells long time bajista loco (bassist), Nate Myers, on this tour and for all shows moving forward. Andrew Black and I will be joined by the classic Hell crew, Sheene Coffin and Liam Neighbors (A.L.N.)


Hey there, everybody. Sub Odin Studios will once again offer one free full-track mix to all new clients beginning in November! Send over the track that you just can’t seem to get to sound right and I’ll get to work on it!

I have been working on many "heavier" songs for people over the years, probably because of my musical background, but I can mix any genre for you. Also, hit me with an email if you’ve got any questions at all about the production process (mic placement, what mic to use where, what riff should go next, should there be a snare hit here or nah? etc) and I’ll see what I can do to help.


Thank you to anyone that was able to pick up copies of Throne Records editions of the Hell trilogy! They are officially out of stock on my end but I do believe Throne Records has Hell "II" and "III" in stock.

Since the cold weather is upon us I decided to order another run of Hell hoodies. They are freshly stocked up and currently available in all sizes at LowerYourHead.com but not sure how long that will last so if you are in need of a layer head on over to the Lower Your Head web store and grab one. The support is immensely appreciated! 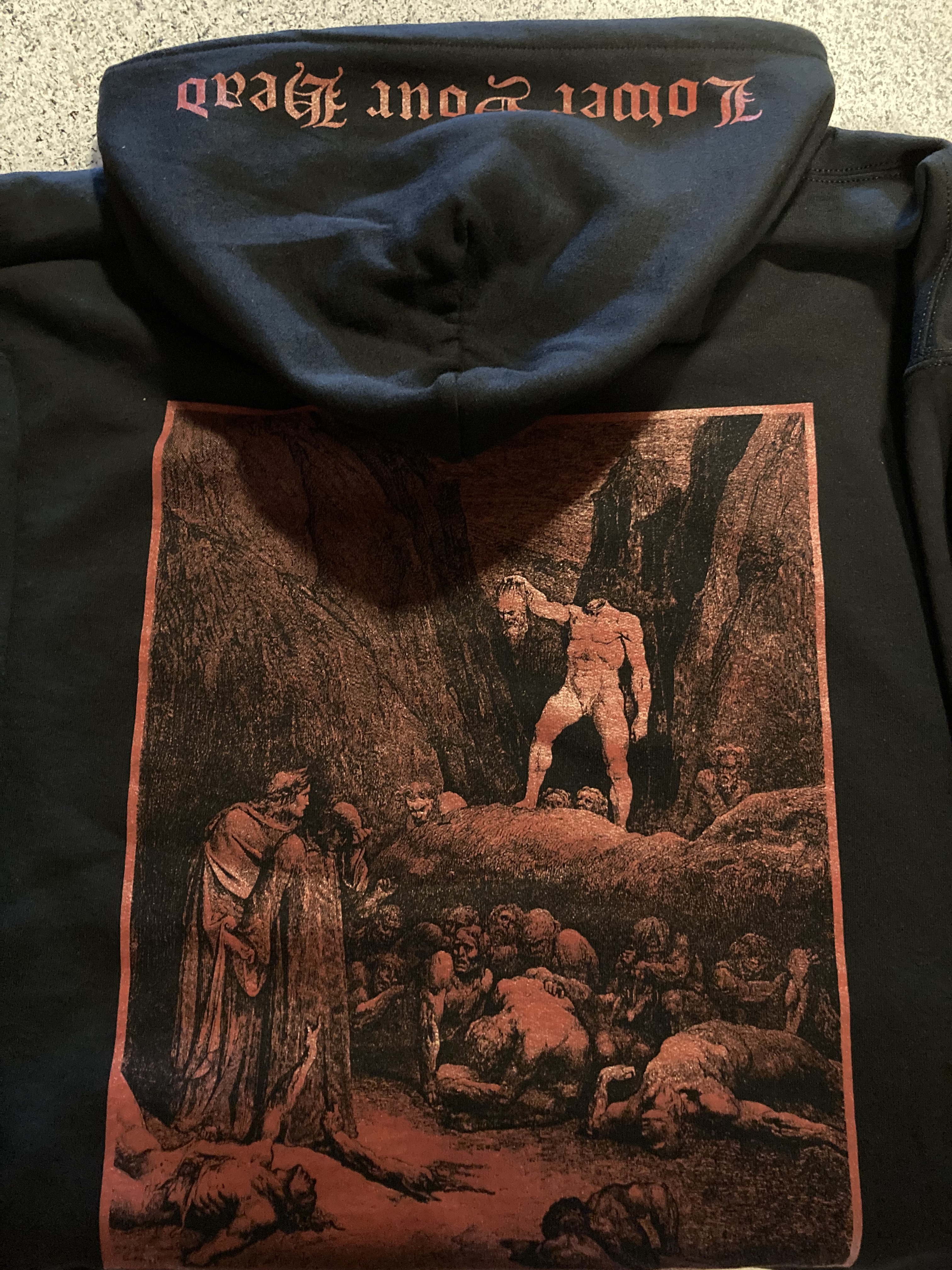 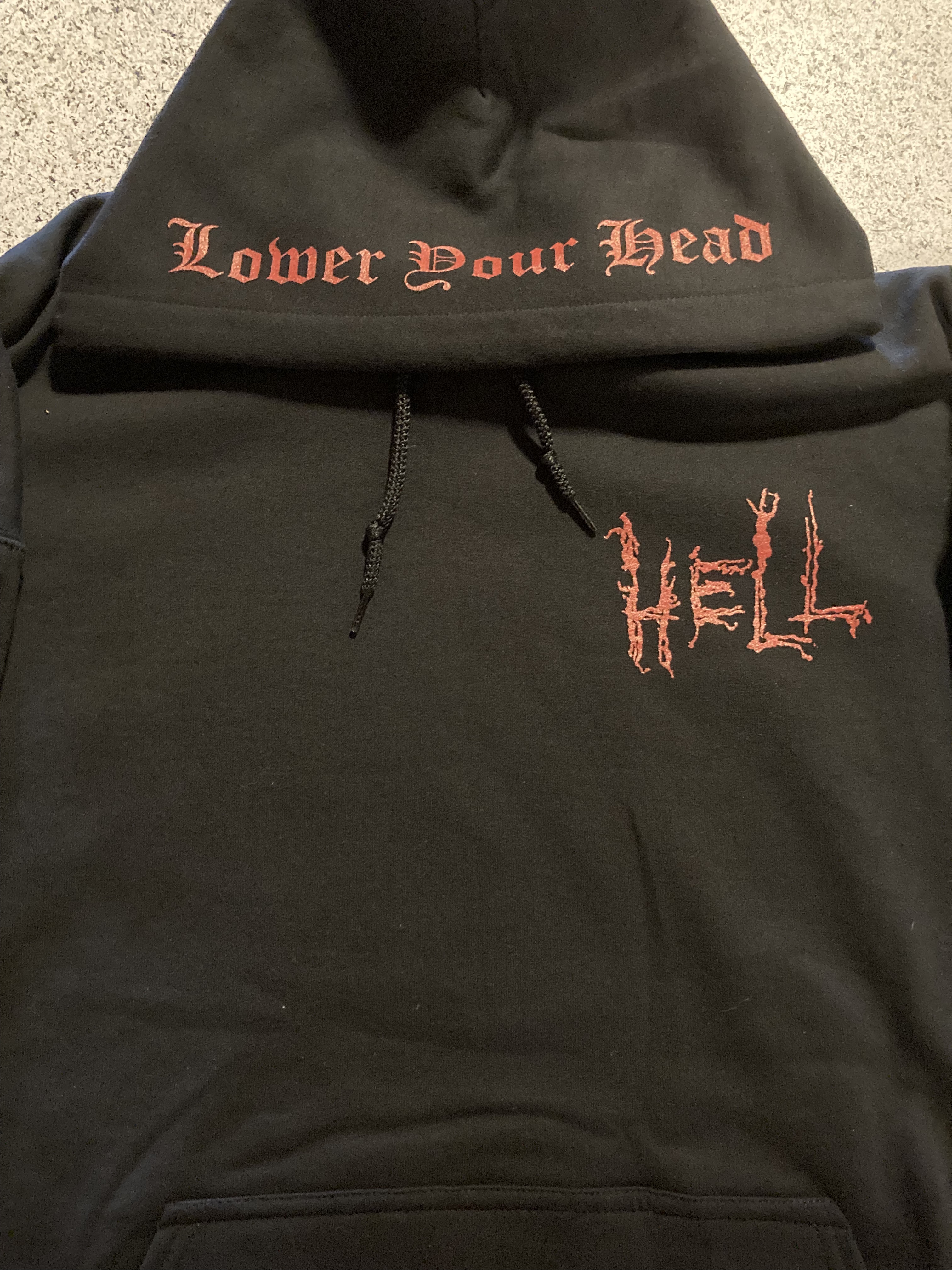 I am still in the writing process of another Hell release but have only just recently made the time for myself to finish the writing and begin the tracking process. Winter is an excellent time to record this music so we'll see what happens. The price of food and rent are about to surge again so I need to get this shit finished before I have start working more!

Also Hell may or may not be coming to you if you live the the United States or Southern Canadian area next year...

Go to ThroneRecs.com (EU) to preorder

Hell “Splits” cassettes are available at loweryourhead.com/product/hell-splits-tape. I made 300 copies. 250 are available on the website. The remaining copies will be at Hell’s merch booth during Oblivion Access Festival in Austin, Texas on May 12th 2022. 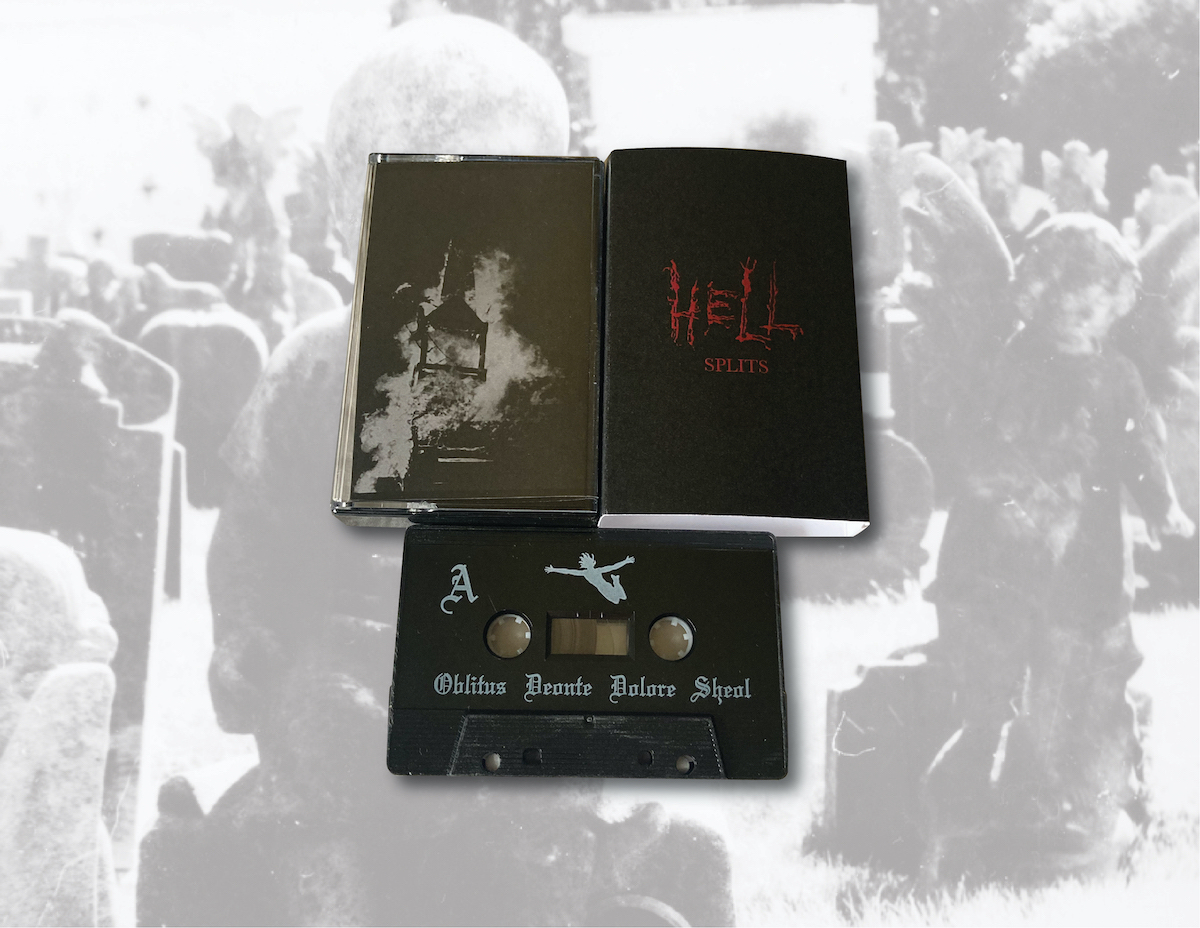 The 2xLP version is available to pre order through the Gilead Media web store gileadmedia.net/collections/pre-orders. I will also have some vinyl copies available, but only once they are in my possession in July 2022. 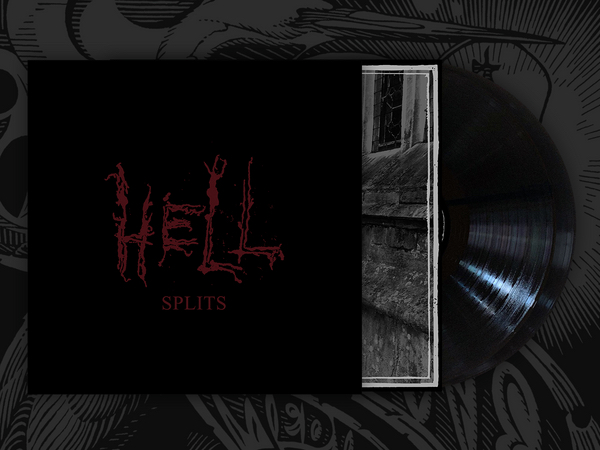 EU pressings of Hell I, II, and III are said to be here in mid-April. Hell will be performing a few shows this year. The majority of the records will be for sale at them. the rest will be available online at thronerecs.com  and some other places - I just don’t know where yet.

I have relocated back to the PNW after spending just over two years in Texas honing my audio skills in. Sub Odin Studios is a business I started specifically for audio work. I am excited to finally have my home studio set up enough to begin offering mixing or mastering services.

I currently do not have a space for tracking full bands so I am temporarily not offering that service.

All mastering jobs will include a digital AND vinyl ready master.

this is just a quick update letting everyone know that the loweryourhead.com website has been revamped a little bit. There are two new Hell shirts available there right now. One is called the 'Charon' and the other is 'Torment and Mourning'.

Also, I finally released/restocked the first three (Trilogy) Hell albums on cassette. Still waiting on vinyl but that may be a while longer. You have the option of buying all three tapes together (with a little discount) or you can buy them separately.

All of the support everyone has been giving has been great. I'm extremely appreciative of it! I've been working like fucking crazy these last two years selling/making merch, keeping up with orders, getting this audio company off the ground and working a part time gig on the side. All to get by. The help from the music and apparel sales has helped me save up enough to move back to Oregon where I belong.

I just wanted to let all of you know I'm doing a fall sale all through October (1st - 30th) at my merchandise page - www.Loweryourhead.com

use LOFISLUDGE at checkout and get %15 off any order over $20.
It's starting to get cooler outside. There are a good amount of Hell zip hoodies still in stock as well as long sleeve shirts.
New back patches should be up in a few weeks. EU edition Hell represses of I, II and I believe III should be here around Christmas time... But we'll see about that.

I hope everyone's doing alright and hanging in there.
Thanks for reading

Hello everyone. It’s been awhile since I did one of these so I thought now is a good time since things are about to change.

I’ve been living in Texas for the last 2 years (or so) studying audio and starting an audio business. Now that the business is going, my lady and I are moving back to the NW area where we grew up and belong.
I haven’t been releasing any new music from this location because since I got here I’ve not given myself enough time to be creative. Working 2 jobs while going to school has been taking up all my time. That being said, thank you to anyone that has supported my projects in any way over the last two years even though very little new material has been put out.

Moving Home
The reason for the move back home to the NW is to establish and open my studio (subodinstudios.com), Get Hell back together and ready to tour/play shows, and rejoin Mizmor but as the secondary guitarist this time - as Nate Myers, of Mania,  will continue to fill the drum position for live events. I also need to go to the ocean and forest and just fucking stand there forever. Deserts are cool and all but just not for me.

Shipping to EU + UK
Shipping to EU is much more complicated now. I’ve attempted to get a VAT number and or create an IOSS account but no dice. It’s just not going to happen. That said, shipping to any EU or any international location for that matter, could take up to 3 months until arrival. UK is even worse. It’s looking like your packages are just being held at customs in your country and ignored or something, but if anyone has received a package from me that lives in the EU’s recently, please let me know.

Bandcamp Friday September 3rd
I’ll be putting a bunch of merchandise up for sale on bandcamp September 3rd including pre-orders for the new Hell long sleeve that Sentient Ruin threw together for me. Every item purchased will come with a free download of a randomly picked song. These “bandcamp Fridays” have been a great way for people to support their favorite artists while playing shows and touring is still a dicy thing to plan out. I can’t tell you how much I have appreciated y’alls support over the last couple years. If anyone out there wants to support the Lower Your Head projects but already has all the stuff they want, I would never turn down a small donation. If that is something you are willing to do then Persauna@gmail.com is my PayPal address and all this money goes straight into the Hell account which is specifically used to restock merch and or buy new gear.

Hell and other things
I’ve finally found some time to start riffing around and creating a base for some new music. My writing process takes a very long time. Nothing is written out on paper or typed up. It’s riff after riff, piecing the riffs together, then creating the vibe of the track and recording. I’m hoping to have some demo sections of what I’ve been working on ready soon… Or maybe I’ll just not say anything and just drop a record in a year or so.
Some of you are new to these projects and some of you have been around since the beginning. Those of you who have been around have probably noticed my writing style change throughout the years from album to album. The most recent release  of MSW “Obliviosus” last year could have very well lived as another Hell record, but I guess I just like to make things more complicated. My initial goal with that album was meshing a Cloud and Hell sound together. This is my justification for thinking that I needed a new name for that release… Incase anyone was wondering.

Anyways, I’m looking forward to getting back to the cold and the rain and away from this Texas heat and playing/creating new music with my people again. Thanks again for any and all of your support. You can reach everything from this link - https://linktr.ee/loweryourhead .  These projects die when I die.

As we creep towards the half way point in this year I wanted to reach out about a few things.
Hell has been on a kind of a hiatus since I moved to Texas to study audio. Since I have moved here back in January 2020 I haven't had the urge or time or space to write much. My time has been consumed with school, work, starting a business and our puppy, Ingrid.

I've been talking to the Hell boys and we are really excited to get back on the road to play some shows next year. I am also excited to be moving back to the NW early next year as well.

An LP box set consisting of every track Hell has put out on splits with other bands will be coming out through Gilead Media either late this year or early next year hopefully. The shows/tours Hell will do will most likely be performances of those tracks as well as some tracks off of the latest Hell self-titled (2017) release.
Since the Throne Records release of Hell III turned out so nice we are currently working on getting "I" and "II" represses out as soon as possible.

A new Hell shirt design is in the works. I'm going to call it the "Mourn" shirt. Lyrics from that song will be printed on the back.

I'm excited to finally get MSW Cloud on Spotify and all those other platforms by mid May 2021. I also created one of those Link tree things so everything (music, merch) is easier to find.
linktr.ee/Loweryourhead

I still have MSW Obliviosus shirts in all sizes in stock as well as just a handful of Obliviosus LP's, CD's, Cassettes, Hell back patches and Hell self-titled LP's.

I hope everyone is doing good and thanks for all your support over the years.